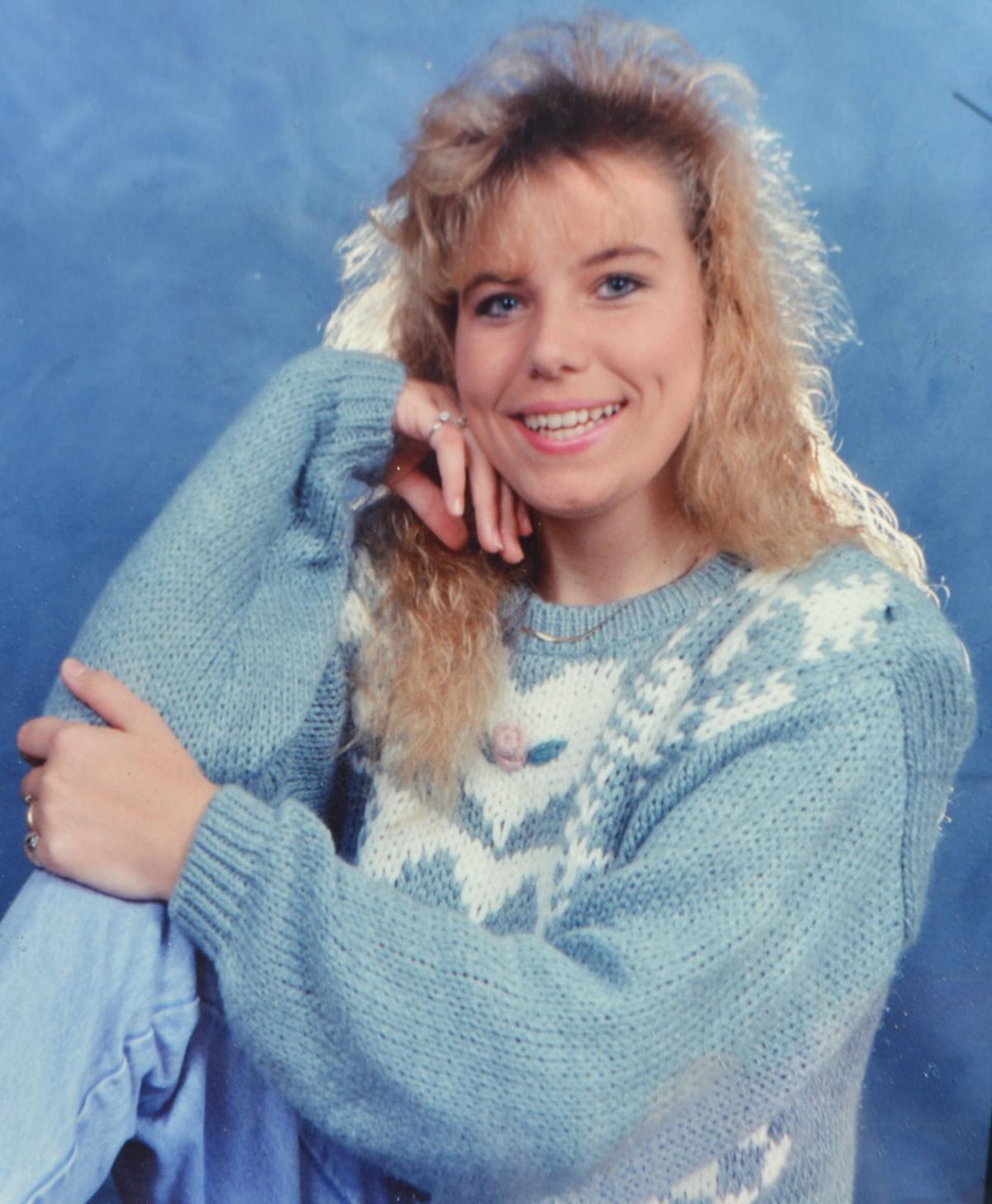 Crystal Soles was last seen at the Shaw’s Corner Store in Andrews, South Carolina at approx 8:00 or 8:30 a.m. on January 24, 2005. The store owner confirmed she purchased a hot dog there, Soles then made a phone call to her father asking for a ride however he was too sick to come pick her up. Crystal told him she would walk home. She never arrived.

Details of Disappearance
Soles was last seen at approximately 8:00 or 8:30 a.m. January 24, 2005 at the Shaw's Corner Store in the vicinity of Jones Avenue and Main Street in Andrews, South Carolina. The store's owner confirmed that she ate a hot dog there and then used the telephone.

She called her father and asked him to come pick her up. Her father was too sick to drive, and Soles said she walk home. She never arrived and has never been heard from again. A tracker dog later traced her scent a short distance from the store.

Soles lived with her father and son at the time of her disappearance; her son is currently in the care of her mother. She has a history of leaving home without warning, but she had always stayed in contact with her son and has never gone for more than a few days before.

Many rumors have circulated about Soles's disappearance, but none of the stories have been confirmed. Her case remains unsolved. 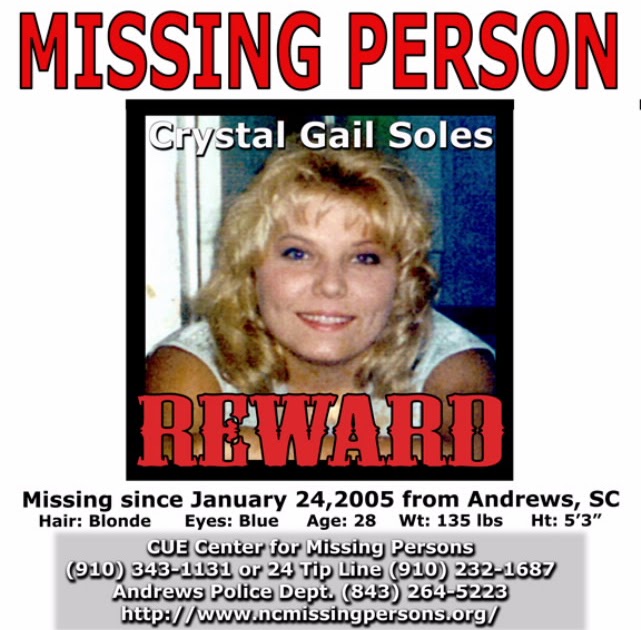 Crystal Soles leaves behind a small son who is still wondering where his mother might be. Wilmington, NC – Four years Crystal Soles ...

Editors note: This is the second story in a series about the Crystal Soles missing persons case.

They came from near and far to celebrate Crystal Soles' birthday, even though she wasn't present for the party. They marched through the streets of Andrews holding signs that said, "We will not give up," "We want answers," and "Happy Birthday Crystal."

They couldn't give her a hug, or watch her blow out her birthday candles, because she's never been found after she disappeared from Shaw's Corner Store in Andrews on Jan. 24, 2005.

But on Nov. 10 -- Crystal's 41st birthday and nearly 13 years after she vanished -- members of her family along with friends and neighbors gathered to celebrate her birthday and vowed to keep her missing persons case in the public eye until she is found. They marched again on Nov. 11.

Crystal's mother, Gail Soles, led the march. "I want people to know we are not giving up and we are going to fight that much harder now," she said.

Crystal's son, 18-year-old Mitchell Soles, was 5 when his mother vanished. During the march, he said he would like to see someone come forward who knows what happened to his mother.

"We would just like to get some closure on it, just so we know what happened and we will not just be wondering," he said. "I just wish they'd come forward with it and let us know. It would make the family happy."

Family members traveled from as far as Daytona, Florida, to participate in the march. Kathy Baker, Gail's sister who has been suffering with lupus and a broken femur bone in her leg, participated despite her pain.

"I'm still here because I love Crystal and want her back home, and I want to show my sister all the support that I can," she said. "We want to find out what happened, whoever done this. It's been a long time."

Peg Collier, Crystal's cousin, said she came to celebrate Crystal's birthday and to continue to bring awareness to the community. "We would really like to get national attention because we feel like there is some type of corruption in the police department," she said.

Andrews Police Chief Marc Whitfield has refused to discuss the case with the Georgetown Times, saying that he doesn't know much about it since he only started in January. He also said he doesn't have time to work on the case.

"I will read through the file when I have time, but I don't have time right now," he said. "I told Mrs. Gail Soles that, too."

Responding to Whitfield's statement that he didn't know much about the case, and didn't have time to work on it, Gail Soles said that is "not fair and not right."

"Crystal is not a priority to them, so why am I wasting my time with the Andrews Police Department?," she said. "It makes you lose all your faith in them."

She said the police need to work on her daughter's case.

"They need to do something," Gail Soles said. "My daughter is just as important as anyone else. What would they think if it was their daughter, their son, their mom?"

Andrews Mayor Frank McClary said his goal is for the police department to do everything it can to solve the case, especially if new tips come in.

"As I told Mrs. Soles, her daughter is missing and right now there is no answer, but my job is to do everything I can to find her daughter," McClary said. "We want to make sure we keep this in the forefront ... we want this to be transparent."

Gail Soles questions whether or not evidence collected by the Andrews Police Department has been properly gathered, processed and stored. She also questions the amount of paperwork in Crystal's file. She has told the Times on numerous occasions that the case file consists of "about 50 pages." A number she believes should be greater, noting that Crystal has been missing for nearly 13 years.

McClary had something to say about the filing system in his police department. "Frankly, this department didn’t do a great job over the years maintaining records," McClary said.
Last edited: Friday at 12:27 AM

Every morning for the last 14 years has been hard on Gail Soles.When I get up in the morning and when I go to bed, that's the first thing I think about...my daughter, she said. What is today going to bring?Soles' daughter Crystal went missing near a corne

Andrews, S.C. — Every morning for the last 14 years has been hard on Gail Soles. "When I get up in the morning and when I go to bed, that's the first thing I think about...my daughter," she said. "What is today going to bring?"

Soles' daughter Crystal went missing near a corner store in Andrews in 2005. She was 28 years-old at the time, with a young child. She and the rest of her family have been facing an uphill battle. "We're never giving up," she said.

Saturday morning, she and other family and friends, who traveled from Kentucky, Florida and Ohio made signs, and marched about 2 miles along Main Street in downtown Andrews.

While they're actively looking for information leading to her whereabouts. Saturday was about raising awareness for Crystal and other missing people in the region. "A lot of people in our town does not know she's still missing," said her mother.

Gail's son showed his support Saturday, reminiscing on happier times when he went hunting with his little sister. The two teased each other enough as children, Gail nicknamed Crystal "The Frog" to comically explain her impulse to stick her tongue out to her brother.

"It's pretty tough," he said. "The longer it gets, the easier it gets. But it's still tough."

The Cue Center for Missing Persons, based in Wilmington, NC, has conducted 21 searches for Crystal since she went missing. Gail calls the Center's director and her volunteers "family".

"We're gonna keep searching, and I told Gail the day I met her that, you know, we weren't gonna go anywhere until she has some kind of resolution," said Monica Caison, Director of CUE Center for Missing Persons.

The two mile walk down Main Street garnered attention from strangers. One woman decided to jump in, just a half mile from the starting point at the town's Food Lion grocery store.

Throughout the morning, Soles questioned the Andrews Police Department. She said she's been discouraged by their 13-year investigation, citing what she called high turnover within department leadership.

She said she believes detectives have been destroying documents important to the investigation. "13 years...where is it?" she asked. "What did they do with (the documents)? I heard (they were) shredded."

She said she visits the department on a weekly basis, constantly looking for updates, but never hears about anything new in the case.

ABC 15 News called the department multiple times Saturday. Our team has not heard back.

The determined mother, eager for more information, said it helped to have a group in solidarity, together, fighting for answers.

"I'm gonna do it, one way or the other," she said. "I'm not quitting, I'm not giving up. I always have my hope and faith. One day, I will find my daughter."

There is a $3,000 reward for information leading to the whereabouts of Crystal.